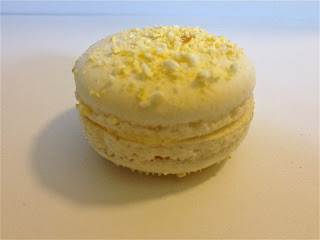 Back in September I had the amazing opportunity to go to Sydney for almost a week. One of the highlights was visiting Zumbo's dessert train at The Star. I absolutely loved the salted butter popcorn macaron so it didn't take much convincing to make a batch at home.

The recipe is in Adriano Zumbo's first book - 'Zumbo' although it is probably in his new macaron book too (which I can't wait to get my hands on!) Take note family, that's a big Christmas present hint!

I'd never tried making Zumbo's macarons before as I have my own tried and true recipe, however I did decide to follow his, which to be honest, was very similar to my own! Same process entirely which made things easy. The ratio of ingredients was slightly different. What I did learn through this recipe, however, was a fabulous 'new' way of making the silkiest buttercream you could imagine. I'm definitely now a convert to this method rather than my usual (simpler) way of beating together icing sugar and butter. Zumbo's method is not gritty in the slightest. You do need to be careful that it does not curdle. I thought mine was ruined until I whisked it a little more and it magically reformed itself!

Anyway these beautiful macarons are for all my lovely dietetic friends whom I have had the pleasure of studying with the the last four years. Tomorrow is going to be such a bittersweet day!

Buttercream
100g caster sugar
38g water
75g lightly beaten egg (about 2 small eggs but you need to weigh)
45g egg yolks (save the yolks from when you separate the whites for the shells!)
200g unsalted butter, softened and cubed.
3g salt flakes

100 macaron shells - See here for my recipe I won't write the method for the shells below, just make them a neutral colour ie don't dye them.

Method
Place the sugar and water in a small saucepan and heat on a low heat until the sugar has dissolved. Increase the heat and cook until the mixture reaches 121 degrees.

Meanwhile place the egg and yolks in a stand mixer and whisk to combine.

Once the sugar syrup has reached temperature, remove from heat, turn the speed up on the stand mixer and slowly pour the hot sugar onto the egg mixture. Keep beating for approximately one minute or until the mixture reaches 50 degrees.

With the mixer still running, add the butter, one cube at a time, allowing it to fully incorporate. Keep mixing until it looks uniform and thick.

Fold through the salt - don't beat it in or it may curdle the mixture!

Place in the fridge to firm up a bit.

Cook the microwave popcorn according to instructions. Place half the popcorn in a food processor and process well. Either eat the other half of the packet or make popcorn balls!

With a pastry brush, lightly coat each macaron shell in melted butter then sprinkle with the processed popcorn.

Leave the shells to set for about 5-10 minutes depending on room temperature. By the time you have finished sprinkling the last shell, the first on has probably already set!

Place the buttercream in a piping bag and pipe onto half the shells. Sandwich together with an buttercream-free shell and leave in the fridge overnight to allow the flavour and chewiness to develop.

Bring to room temperature before serving.

As with most macarons, these freeze really well!